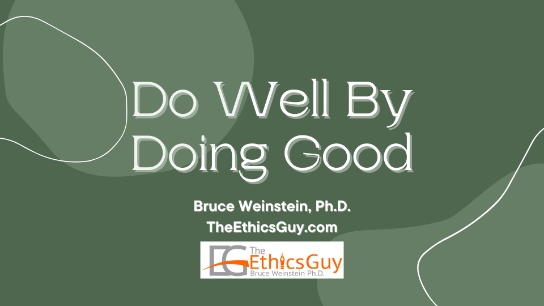 Do Well By Doing Good

You can do well by doing good. Consider how Kickstarter did it.

Kickstarter retooled itself as a “public benefit corporation.” It’s a relatively new category in the corporate world, and under the designation, the crowdfunding platform is still a for-profit company, but it must now try to do something that helps the public, a goal that has be included in its charter.

“Change the World,” an annual special feature in Fortune magazine, lists companies that are “doing well by doing good.” Take a look. You might be surprised to see which businesses are on the list. “Business in pursuit of profit still offers the best hope of addressing many of mankind’s most deeply rooted problems,” wrote Fortune editor Alan Murray in his introduction to the first edition. “[C]apitalism should be not just tolerated but celebrated for its power to do good.”

As the magazine revealed, making money and helping people can exist side by side as core values of a successful business. And even before it took the PBC mantel, Kickstarter has been just one of many organizations whose financial success is a function, not a happy coincidence, of its commitment to making a positive difference in others’ lives.

Transparency is more than a buzzword

A New York Times story about Kickstarter notes that the company is going even further than most other public benefit corporations. The article quotes New York attorney Kyle Westaway as saying PBCs must present their social and environmental impact statements once every two years. But Kickstarter is already a B Corporation, a separate voluntary designation with its own set of environmental and social guidelines that require the company to report every year. “This represents a real commitment to transparency,” Westaway observes.

Transparency—the practice of letting others in on what you know—applies not only to how business leaders regard boards of directors and stockholders. It also concerns how leaders treat their employees. Robert Hohman, CEO of Glassdoor, wrote an article for Fortune that suggests a lack of transparency in a company’s leadership is a major reason why employees quit. Glassdoor surveyed 400,000 employees around the world and came to this conclusion:

While pay is important, employees place a significant amount of weight on company culture, career advancement opportunities and senior leadership. People want to work somewhere they feel respected and valued. They want to connect to the company’s mission and vision, as well as be kept abreast about progress along the way. Even more so, they want to know how they personally can make an impact and move up the ranks.

Transparency is an essential form of honesty, and it means more than telling the truth to the press when a crisis emerges. It means more than explaining to shareholders what’s going on with the company. Transparency, at its deepest level, is about being forthright with stakeholders, and that includes the lifeblood of every company, namely the people who work there every day.

Kickstarter’s altruist direction raises a major question: What counts as a benefit to the public? After all, what you consider to be beneficial, I might find distasteful or worse.

For example, photographer Spencer Tunick received funds for some of his work through Kickstarter. If his name is unfamiliar to you, his photos probably aren’t. They’re the shots of masses of people in familiar public places, and every person is nude. Some argue that his work helps us to see the world in a new way, which is what art at its best is supposed to do. Others find Tunick’s work to be anything but enlightening.

It is beyond the scope of this article to define what “public benefit” should and should not mean. I merely raise this as issue for discussion as other companies—perhaps yours—consider whether it makes sense to adopt the PBC designation.

In any case, Kickstarter’s move will spur much-needed reflection on how companies may accomplish two worthwhile goals: making money and making a difference.

How would you apply the lessons here in your work as a CPA, HR professional, or other leader?

Thank you for reading my blog!  I hope you're having a good day. Or at least not an awful one.

As The Ethics Guy®, my virtual and in-person keynotes and video training programs help companies promote ethical behavior at every level of the organization. The result is an engaged and satisfied workforce, better clients, and a strategy for long-term financial success. I received a B.A. in philosophy from Swarthmore College, a Ph.D. in philosophy and bioethics from Georgetown University / the Kennedy Institute of Ethics. My books include "Ethical Intelligence," "The Good Ones: Ten Crucial Qualities of High-Character Employees," and for tweens and teens, "Is It Still Cheating If I Don't Get Caught?" Contact me to check my availability to speak to your group here.

Ethics Credits for You

Here are links to my ethics courses on CPD Formula and LearnFormula, all of which will earn you one or two ethics credits. Just scroll down past my bio and you'll see them all.

We'll keep you in the loop with everything good going on in the modern professional development world.

By submitting this newsletter request, I consent to LearnFormula sending me marketing communication via email. I may opt out at any time. View LearnFormula's privacy policy